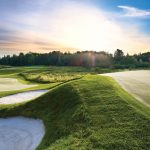 A Magnificent Marriage of Nature and Golf Awaits

Seguin Valley Golf Course is a rare-blend of a course that blends exhilarating holes that make you want to dive into the challenge with picturesque views forcing you to take just a moment to enjoy them. It also boasts a brand-new club house whose design takes a back seat to no one. With its immaculate grounds and lake front views, it’s easy to see why Seguin Valley Golf Course is known as one of Parry Sound’s premier golf facilities.

A spectacular , 18-hole, course located five miles south of downtown Parry Sound, Ontario complements the contours created by the geography of the Canadian Shield. Rather than attempt to completely tame the landscape, Seguin Valley incorporates its rugged beauty into the design. Golfers who play the course will experience fairways that twist and turn their way between woods marshes, through fields, and—in the case of the signature Hole 7—over a lake, even while admiring the views of wind-blown pine and rocky outcroppings thrusting from the earth for which the region is known.

The Ridge of Manitou

Located just a 20 minute drive from Parry Sound on the shores of beautiful Lake Manitouwabing, the Ridge at Manitou boasts an 18 hole golf course designed by Thomas McBroom. “The layout is one of Thomas McBroom’s best, flowing nicely from hole-to-hole,” says Drew Rachar, General Manager and Course Supervisor at the Ridge at Manitou. “It’s challenging but fair. What people like is the fact that there’s separation between holes, so you don’t always see the next hole which creates the illusion that you’re really on your own.”

The Ridge at Manitou began as a vision shared by a group of Manitouwabing Lake cottagers several years ago: they foresaw a golf course with the finest of facilities blending harmoniously with the nature that attracted them to cottage in Parry Sound in the first place. When their collective vision was realized, the result was something special indeed. The course is hewn out of the Canadian Shield and flows through rock, forest, and meadowland. Playing over 6,800 yards from the back tees, the Ridge is best described as challenging enough for accomplished golfers, yet forgiving enough for novices.

Whether you’re a novice at swinging the clubs or an avid golfer, there’s a course to suit your abilities in Parry Sound. Many golfers begin at Deer Run Golf Course, which was designed in 1995 as a nine-hole course specifically for those of intermediate skill or who merely want a relaxing afternoon on the greens free from nerve-wracking obstacles.

The front nine is geared to the casual golfer, with generous fairways and limited bunkering. Expansion in 2002, done with an eye towards the more experienced golfer, brought Deer Run up to 18-holes. The back nine is more challenging with some elevation changes, tighter fairways, and more frequent water obstacles for a course of 6,120 yards. The result was a relaxing, enjoyable experience with just enough variation to hold the attentions of even more capable golfers.

For those who want to immerse themselves in a sense of history, there’s no better place than Parry Sound Golf and Country Club, which was founded as a 9-hole course in 1929. Thomas McBroom designed a new course in 1982 to replace the original, carving 18 spectacular holes from the Pre-Cambrian Shield to create a course perfectly suited to entire a new century even as the Club fondly preserves it traditions.

“Our course is very tight, only 6,000 yards from the tips, but we like to say it’s the best 6,000 yards you’ll ever play,” says Robinson. With a premium on accuracy, the course tests every club in one’s bag. It’s a definite challenge—one usually associated with championship length courses.

No golf course in Parry Sound screams Cottage Country louder than The Rock in Minett The course’s very name hints at how greatly it has been defined by the granite of the rugged Canadian Shield for which the region is famed.

The course was built in 2004, and thanks in large part to the amount in which rock outcroppings came into play was notoriously challenging. Extensive renovations in 2007—to the tune of $6 million— saw the six most difficult holes reimagined to make it a softer, fairer course. The result is a more playable course, yet one which retains the atmospheric elements for which it was named.

Two holes exemplify what the Rock is all about, according to Director of Golf Rob Wilson: “The 10th hole, a short par 4, has fantastic scenery and a huge rock outcropping. In the autumn the trees behind the hole are spectacular with flaming red leaves. The 14th hole is even more dramatic—it has a crazy cliff that offers a view that’s just unreal, especially in October when the leaves turn.”

Make it a weekend getaway and find accomodations nearby. Add one one of these great tours and attractions to your getaway to the Parry Sound region of Explorers Edge.

Parry Sound hugs the shores of the world’s largest freshwater archipelago, known as the 30,000 Islands. In 2004,UNESCO designated the area as a World Biosphere Reserve, the Georgian Bay Biosphere Reserve.

Sign up here to receive The Parry Sound Tourism newsletter to get tips, tales, deals and travel packages for your next adventure in Parry Sound